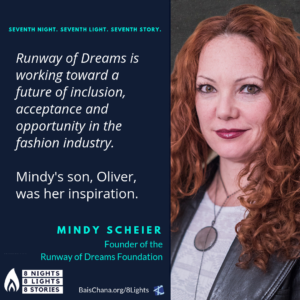 “Muscular dystrophy affects Oliver’s muscle strength, his pulmonary system, distorts his body and makes everyday life more challenging than most,” Mindy explained. “We discovered early on that he was really struggling with being able to dress himself.”

Oliver’s brain was not affected by his muscular dystrophy, so he was acutely aware of his shortcomings. The daily act of dressing himself was a constant reminder of what he could and could not do.

And that was Mindy’s inspiration for starting the Runway of Dreams Foundation. 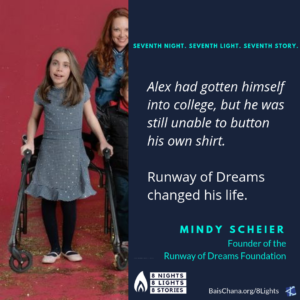 Her mission: working toward a future of inclusion, acceptance and opportunity in the fashion industry.

But it’s about so much more than the clothing. Runway of Dreams is about confidence.

The confidence that comes with independence. The confidence of being able to get dressed without being reminded of their disability. And the confidence to take pride in sharing themselves and how they look with the world.

Gianna was born with part of her forearm missing. The sight of a limp sleeve hanging was so painful, her mother brought every item of her clothing to be altered by a professional tailor.

Until Mindy came on the scene, all adaptive clothing was strictly medicinal or functional, but not stylish.

However, “The clothes we wear affect our mood,” explains Karen J. Pine in her book Mind What You Wear: The Psychology of Fashion. In psychology it’s called “Enclothes Cognition.”

And that’s why Oliver felt isolated when he couldn’t wear jeans like the rest of the kids at school. Wearing sweatpants every day made him feel disabled. 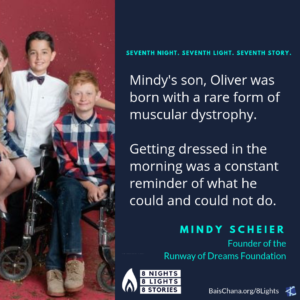 And Oliver isn’t the only one. There are at least 1 billion people in the world today who are differently-abled. If only 10% of them feel the way Oliver felt, that’s a LOT of people who aren’t living their lives with full confidence, and maybe they’re not as successful or as happy as they could be.

After a full year of research, Mindy, a passionate fashion designer by trade, identified 3 categories that needed solutions for children who are differently-abled.

Firstly, the closures that are used. For someone who is differently-abled, buttons, snaps and zippers just won’t do. So Mindy came up with an ingenious magnetic design that still allows clothing to look typical.

The second solution was having the ability to adjust the clothing for all shapes and sizes. And the third, was having multiple ways of getting in and out of the clothing.

Alex was born with a limb difference, which completely blindsided his parents on the day he was born. “We worried about him. But one by one, Alex displaced our fears by accomplishing everything he said he would do,” Alex’s mom said.

Yet, there he was at a crossroads. Alex had gotten himself into college, but he was still unable to button his own shirt.

Rather than designing her own collection, Mindy knew that to make a real difference, she had to go mainstream. She believed she just had to educate the industry of the enormity of the differently-abled population and the fact that they were consumers, just like everybody else. 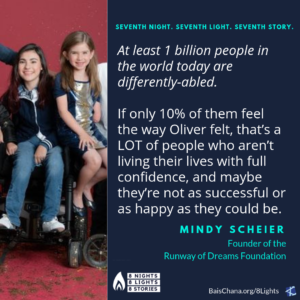 “I’m thrilled to say the industry heard me!” Mindy says with excitement in her voice.

Runway of Dreams has empowered Oliver, Alex and Gianna – and millions of others who are differently abled – with confidence, independence and pride.

To find out more about Mindy’s work and Runway of Dreams Foundation: RunwayofDreams.org

Meet all the remarkable lights here.