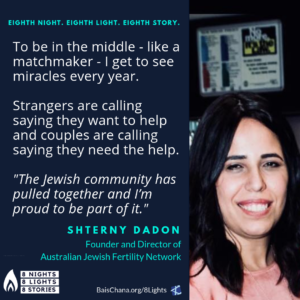 IVF treatments, with no guarantee of success, cost thousands of dollars for each round. For many couples suffering from infertility, there is also a tremendous amount of shame.

About 12 years ago, Shterny got a call from her uncle, Rabbi Ulman,* asking if she had some time to spare.

Shterny’s husband had just gotten back from a trip overseas. It was a hectic morning and Shterny needed to get the kids to school. The timing was extremely inconvenient and it was completely impractical for her to say yes.

But she was curious, and something inside her made her agree to help.

“The way that kosher IVF treatments work is that the egg and the sperm have to be carefully supervised every step of the way,” Shterny explained. “So when this couple’s mashgicha (kosher supervisor) canceled at the last minute, my uncle, who was overseeing their treatment, called to see if I could fill in as their supervisor.”

“When I met this couple I was shocked. The whole thing took me by surprise and it really moved me and opened my eyes,” Shterny remembers. “It was obvious how much it meant to them to have me there and how difficult it was to keep trying again and again, not knowing if the IVF treatments would ever work.”

Shortly thereafter, a few weeks before Chanukah in 2006, Shterny heard about a couple who was struggling to afford the cost of IVF treatment.

Then she happened to mention the story of this financially strapped couple – who desperately wanted a child – to her friend.

This friend was a doer.

Right then and there she convinced Shterny that they MUST arrange a fundraising event to help this couple.

Three weeks later, on the second night of Chanukah, 100 people showed up for their first event called Spa for the Soul.

“People we didn’t even know came out of the woodworks to support this couple. They just wanted to be involved.”

And from there, Spa for the Soul, became more than just a one-time event.

Three years ago, Shterny got a call from a couple that had a very low chance of success with IVF. They’d tried multiple times already and they were only going to try one last time at a different clinic hoping for a better outcome.

During their final round of treatment, they got a call to cancel the trigger injection for egg collection. The new clinic that they were using had flooded and was unable to do a pickup the next day. 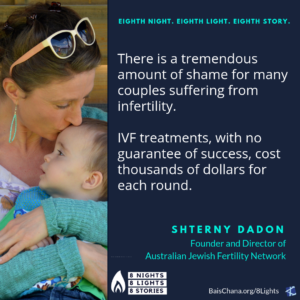 They were devastated. This was their final shot.

“I knew the doctor of the previous clinic they had used, and, with quite a bit of chutzpah, I asked him to take them back the next day so they could complete the round,” Shterny recalls. “Thankfully, the doctor agreed.”

After that, Shterny didn’t hear from the couple for a few months.

A while later she got a call that the treatment was successful! A few months after that, the couple had a beautiful baby boy.

Although there have been a number of difficulties over the years, it’s stories like these that remind Shterny what an impact she is having through her work with AJFN.

“It’s amazing that they had a number to call,” Shterny says with full gratitude to her community of supporters. “Although we’ve had our ups and downs, because of the incredible support of the community, AJFN was still around and they had a phone number to call.”

Over the last 12 years, with the help of an incredibly dedicated committee, Shterny has guided the organization to expand its services.

Their services now include mentoring by couples who have gone through IVF, offering emotional support for the many couples who feel shame surrounding their infertility, and raising awareness about infertility within the Jewish community. 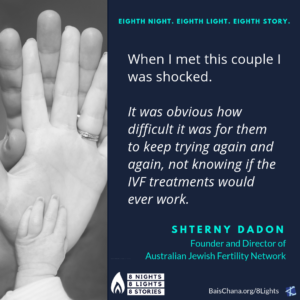 structured and its reach and resources have broadened.

In the last year alone, there were 6 pregnancies and so far 3 babies were born.

With G-d’s help and dozens of miracles along the way, AJFN, founded by Shterny Dadon, has helped bring 18 Jewish babies into the world to date.

*Rabbi Ulman of Sydney Australia is known for helping couples struggling with infertility.