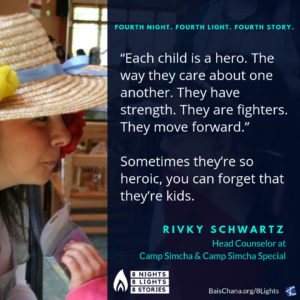 The hardest part about Rivky Schwartz’s job as head counselor of the girls division at Camp Simcha and Camp Simcha Special is watching children suffer. And there’s nothing like seeing a parent in pain for their child.

But the privilege of bringing happiness to children who’ve been stripped of their childhood and thrown into a world far beyond their years is immensely rewarding. 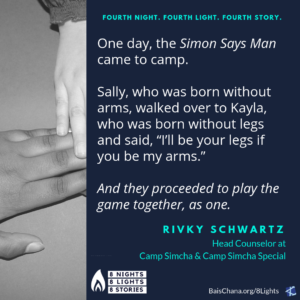 “Rivky is a powerhouse. She is full of love and warmth. And through Camp Simcha, she gives the kids a safe place for a renewal of love, life and happiness,” said Chana, who was a camp counselor at Camp Simcha a few years ago. “She’s seen it all and is rock-solid strong.”

It’s been almost 20 years, and Rivky keeps coming back.

“Each child is a hero. The way they care about one another. They have strength. They are fighters. They move forward.” Sometimes they’re so heroic, you can forget that they’re kids.

They may look small and they may be young, but their capability and ability to teach and change everyone around them has a ripple effect, because eventually it changes the whole world for the better.

Many children who come to Camp Simcha are in the beginning stages of their cancer, some having just begun treatment. When Sophia* came to Camp Simcha, she knew she would start losing her hair soon. 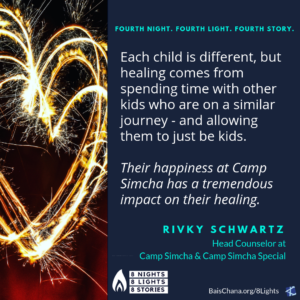 Within the first few days of camp, in middle of dancing, Sophia turned to Rivky and said, “There’s no place else in the world that I’d rather lose my hair than surrounded by all these kids who’ve already lost theirs.”

Working alongside incredible doctors, Rivky has tremendous gratitude for the miracles of modern medicine. At the same time, “There’s medicine, but then there’s healing,” Rivky explains. “And their happiness at Camp Simcha has a tremendous impact on their healing.”

Each child is different, but healing comes from spending time with other kids who are on a similar journey – and allowing them to just be kids.

But Elena asked for one more day at Camp Simcha. 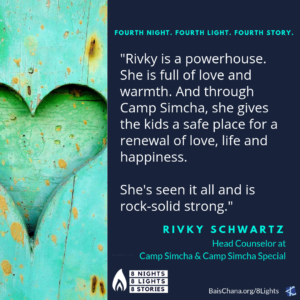 The Make a Wish Foundation flew Rivky and Elena’s 2 counselors in, and together, they reenacted a day of Camp Simcha.

At the end of the day, when one of the staff members from Make a Wish was saying goodbye, she said, “When Elena asked for one more day at Camp Simcha, we did all the research we could possibly do about you guys, but I still couldn’t understand what this meant to her.

“I do a LOT of research. I watched all your videos. But the energy that you brought here, watching her smile and the love that you gave her… that said everything.”

Meet all the remarkable lights here.