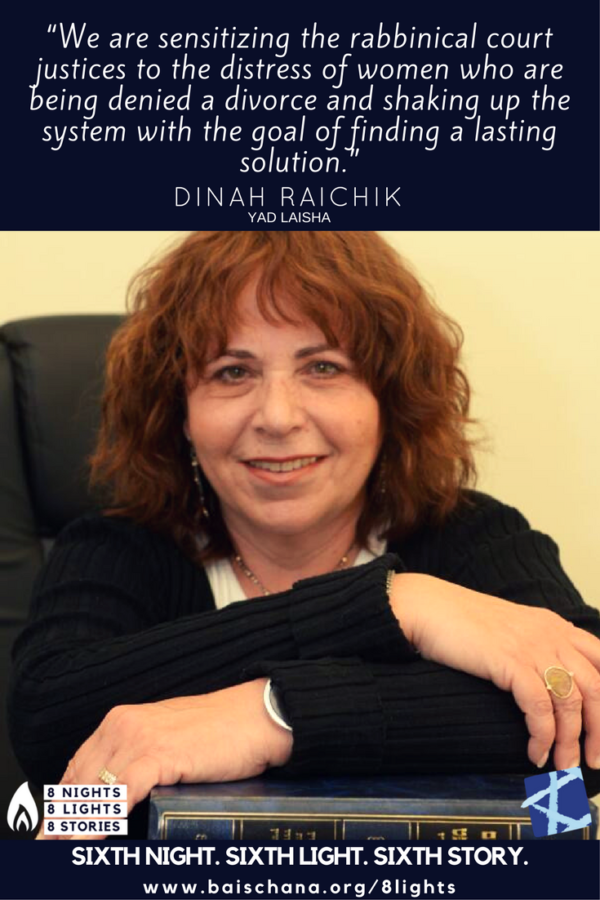 Dinah Raichik is no stranger to real life drama, often the tragic kind. But this case stood out.

“An Iranian Jewish woman had gotten married in Iran and had two kids. At one point her husband married a Muslim girl, became Muslim himself and expected his wife to accept this new arrangement. She ran away from Iran with her two kids, literally walking through the mountains fleeing for her life, until she arrived in Israel.”

That’s a page-turner right there – if only it weren’t true.

Once the woman got settled in Israel, she wanted to end the marriage. That’s where Dinah came in. She is the head of the southern branch of Yad L’Isha, A Helping Hand for Women, a Legal Aid Center and Hotline providing women imprisoned in hopeless marriages with the free legal representation they need to receive a Jewish divorce.

Dinah, an educator for twenty years, completed the Women’s Advocate Program and joined the Yad L’Isha staff in 2003. Tough cases were the nature of her work, as ex-husbands who refuse a divorce are generally abusive, vengeful or mentally unstable. Some cruelly exploit their power by demanding custody of the children, rights to the marital home or huge sums of money as concessions in exchange for the get, the legal Jewish divorce.

The case of the Jewish woman from Iran presented a unique problem, Dinah recalled. “We don’t have a formal relationship with Iran. We couldn’t send anyone to talk to the man and the little bit that could be done over the phone didn’t produce any results. He was very clear that he wasn’t going to give the get. He insisted that there was nothing to talk about and she had to go back to Iran. It was a very difficult case.”

“Usually the question is ‘When?’ How long will it take for the woman to get the get? But this time the question was really ‘if.’ If we would be able to figure out a way to get this woman her freedom.”

“Finally, after much investigation and questioning, a question arose about whether the original wedding was actually kosher, if everything had been done correctly according to Jewish law. We brought the case to the Bait Din, the Jewish court. They investigated carefully, speaking to the rabbi who made the wedding, and to family members now in Israel. They came up with a unique ruling, within the realm of Jewish law, but an extreme ruling, that the marriage was void. This was very unusual. So she was not considered a divorcee, but single,” Dinah explained.

Yad L’Isha is staffed by female rabbinically-trained advocates who have a comprehensive understanding of Jewish law and represent the women in the rabbinical courts. Yad L’Isha is often the last option for women who are not able to get a divorce otherwise. They accept women of all backgrounds, affiliations and ages.

Yad L’Isha also supports these women with empowerment and parenting workshops, personal coaching and financial counseling. Day-to-day activities include representing women in rabbinical courts, combatting extortion, and filing innovative, precedent-setting civil and rabbinic litigation in pursuit of solutions for women whose husbands have disappeared or are refusing to grant a get.

In addition to assisting individual women in their quest for freedom, the organization helps find absent husbands, and holds empowerment and parenting workshops. They have 10 staff coaches who provide coaching to Yad L’Isha’s clients on a pro-bono basis. This coaching helps women who have been physically and verbally abused to regain their self-esteem and confidence.

The Center’s long-term goals include increasing public awareness and educating Israel’s religious and political leadership in order to promote lasting, systemic change. They also promote awareness amongst members of the Knesset, draft scholarly articles and compile case books. Their free hotline offers guidance, counseling, and appropriate referrals to women from across the country.

“In addition to our work on behalf of individual clients, I’m excited to be a partner in the process of raising public awareness to the plight of the aguna or chained woman,” says Dinah. “We are sensitizing the rabbinical court justices to the distress of women who are being denied a divorce and shaking up the system with the goal of finding a lasting solution.”

“We are hareidi observant women, working from within the system. The rabbinical courts are supportive of our work. We haven’t encountered opposition,” Dinah says. Everyone wants to find kosher solutions to this terrible problem. Dina has learned how to handle the intense, life-saving work. “You can’t let the difficult cases affect your work. I’m helping women get out of difficult, often tragic situations so I have to remove myself emotionally.”

While she may feel she’s maintaining professional distance, others don’t perceive her as distant at all. A recent client, Yael, had this to say. “It took a very long time to hold the get in my hands. I received legal assistance from a lawyer that was nice but I felt that things could move faster elsewhere. The Beit Din referred me to Yad L’Isha. Once I arrived at Yad L’Isha and met Dinah, everything changed and began to move quickly. Dinah is charming, attentive, on top of things. Anything I write cannot describe how grateful I am to her.”

If the solution for the Jewish woman from Iran is any indication, Dinah is also insightful, tenacious and leaves no stone unturned to empower Jewish women.

We found out about the remarkable work Dinah is doing after she helped one of the women who attended Bais Chana’s Single Jewish Moms Connect. Read more about Dinah’s organization at yadlaisha.org.il

COMING UP NEXT AT BAIS CHANA