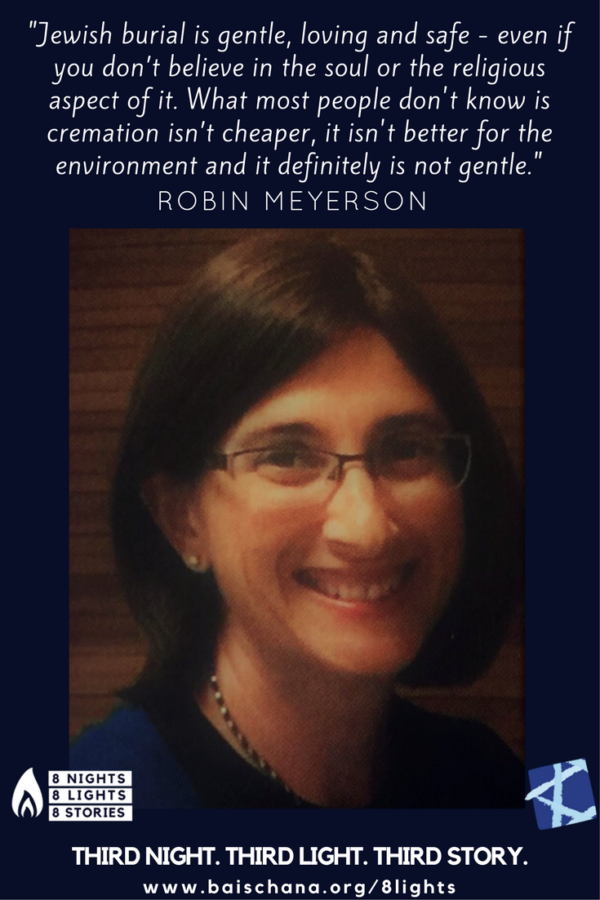 For the Sake of Body & Soul

It started so strangely.

One day, Robin got a feeling to call her aunt and say hello. “Are you calling because you know?” her aunt asked. “Uncle Arnold just passed away.” Robin was stunned.

“And there isn’t going to be a funeral. Everyone here does cremation, all the Jews too.”

Robin was even more stunned. Cremation isn’t a “Jewish thing”. As she struggled to get the family to reconsider their decision, miracles happened. After two weeks in limbo, the family met to finally decide. As they gathered, Robin’s cousin – seeing the fireplace – suddenly ran out of the restaurant. She’d had a dream two nights earlier, the same night Robin had given tzedaka in her uncle’s merit and arranged for Torah study to comfort the soul of the deceased.

In the dream, her cousin’s father appeared and firmly said, “Don’t cremate me.”

At Uncle Arnold’s funeral, an aunt hugged Robin and said, “Honey, this is your calling. G-d is going to repay you.” Robin thought, “that is the weirdest thing for someone to say.”

Several months later she discovered she was pregnant, though she was sure her childbearing years were over. The baby ended up being overdue, as if waiting, and was born on Uncle Arnold’s first yahrzeit, the anniversary of his death. He proudly bears the Hebrew name of his great uncle, Azriel Mordechai.

The experience catapulted Robin into action.

“That is why I got into this so passionately. It was such an open miracle that I had to tell everybody and anybody that cremation is not the thing to do. I did research, built a website, made a book and brochures, gave speeches. Most Jewish people just don’t know this is about both the body and the soul, so I work to educate and inform.”

Still, you have to be pretty bold to talk about this stuff.

Prior to 1970, hardly anyone got cremated. It was very taboo. Today 50% of Americans are choosing cremation and about 40% of the Jewish people. “Just look at what our enemies did for thousands of years. The Crusaders, the Spanish Inquisition, the Holocaust – they were always burning, completely destroying the body. A burial is gentle and natural and there’s a possibility of regeneration. There’s the hope for resurrection because the soul lives on.”

Robin tries to open a dialogue with people, and shed light on their misconceptions. “Many people think it’s better for the environment, and have romantic images of scattering the ashes in the ocean or having Grandma with them in an urn on the fireplace. They don’t realize that burning is extremely toxic. Environmentalists love Jewish burial. There’s no embalming, it’s a plain wooden box, it’s gentle, it’s natural. You’re not spewing mercury and smoke into the air like cremation does. And as far as the urn, there’s no DNA, no actual remains of the person, even on that microscopic level. It’s nothing, just ashes.”

Most people also don’t realize how brutal and violent the cremation process is, as graphic videos on her website show. When money is the factor, Robin helps people understand the eternal value of a burial, and that many Jewish communal organizations will subsidize the costs.

She describes how gentle, loving and holy the Jewish burial process is for body and soul. “We wash, and gently wrap and carefully lower the body into the ground. Whether or not family will visit, cemeteries are a place where the soul rests, and part of it remains connected and hovers there for eternity.”

Robin has traveled the world as a marketing whiz, motivational speaker, teacher and author but this is her life’s work and passion now: helping people make the end of life right.

Robin compiled stories about Jewish burial and the afterlife in a moving book, “From This World To The Next”. Visit Robin’s website, peacefulreturn.com, to get the information you need to make this important decision.

Robin’s articles  have appeared in more than 50 countries. She is a contributing author to A Cup of Comfort For Women and the author of A Son Returns: True Stories of Serendipity and Divine Intervention.