Join CHANUKAH: THE FEMININE DIMENSION for the insight and inspiration you need for a bright Chanukah.

You may have a warm memory of lighting the menora on a wintry night...but what's the deeper meaning of Chanukah?

>> What role did women play - and what's the feminine dimension of Chanuka?

>> At a time that feels so dark, what's the takeaway message for us personally?

>> What's the message for the world? 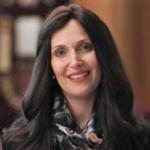 CHANA SLAVATICKI is passionate about Jewish education, and has been teaching high school and adult learners for nearly twenty years. She's the director of Adult Education at Beth Tfiloh Congregation of Baltimore and teaches Judaic studies at the Beth Tfiloh Dahan Community High School. Chana holds a Master's Degree in Education, and specializes in curriculum development. She lives with her husband and children in Baltimore, MD.

2)Shabbat 23:A
Rabbi Yehoshua ben Levi said: Women are obligated in the candles of Chanukah because they too were part of the miracle.

3)Tosfot, Pesachim 29a
Even though this is a positive commandment that is bound by time and women are generally exempt from performing such Mitzvot-even those that are of Rabbinic origin.

5) Rashi Shabbat 23:A
There was a decree that on the day of her wedding, a Jewish girl was forced to sleep with a Greek governor prior to marrying her husband.
Also, the miracle happened through a woman.

6)Megillat Antiochus and Midrash Maaseh Chanukah (As explained in English by Rabbi Levik Gourarie, Chabad.org)
Chanah, who, after being expected to go through an offensive and inappropriate experience, put her foot down, urging and encouraging her brothers to protect her honor and the honor of all Jewish women.The law at the time required every Jewish woman to spend her first night as a married woman with the Greek governor. This decree went on for a while, causing many women to either not marry or to endure this horrible violation. On Chanah’s wedding night, she spiritedly persuaded her brothers to stand up for justice and to rid themselves of the depraved governor.38

The Maccabees resolved to take on the Greeks, stormed the governor’s palace, killed him and wreaked havoc in his camp. This incident served as another spark that catapulted the already unsteady military situation into a full-on war. In addition to Yehudit (who may or may not have been a relative as well), Chanah is referred to as one of the heroines of Chanukah story, with some rabbinical sources even attributing the entire miracle to her.

7)The Book of the Kolbo, Chapter 44: (Aharon ben Jacob of Narbonne, 13th century)
Women are obligated to light Chanukah candles, for they too were included in the miracle. This means that the enemies came to destroy everyone, men, women, and children, and there are those who say that the great miracle occurred through a woman. Her name was Judith, as the story goes, and she was the daughter of Yochanan, the high priest. She was extremely beautiful, and the Greek king wanted her to lay with him. She fed him a dish of cheese to make him thirsty, so that he would drink a great deal and became drunk, and recline and fall asleep. And it happened just that way, and once he was asleep, she took his sword and cut off his head. She brought his head to Jerusalem, and when the armies saw that their leader had been killed, they fled. For this reason, we have the custom of eating a cheese dish on Hannukah.

8)The story of Yehudit:
https://www.chabad.org/holidays/chanukah/article_cdo/aid/103019/jewish/The-Story-of-Yehudit.htm

9)Talmud Pesachim 77a:
ritual impurity is overridden in cases involving the community.

10)Inside Time: (Based on the works of the Lubavitcher Rebbe, adapted by Yanki Tauber)
Strictly speaking, none of this was necessary. The law which forbids the use of ritually impure oil in the Temple would not have applied under the circumstances which prevailed. According to Torah law, “The prohibition of impurity, if affecting the entire community, is waived” - if the entire community, or all the kohanim (priests), or all the Temple’s vessels, are ritually impure, it is permissible to enter the Temple and conduct the Temple services under conditions of impurity. Nevertheless, G-d wishes to show his love for His people, He suspended the laws of nature in order to enable them to rededicate the Temple without any compromise on its standards of purity – even a perfectly legal and permissible compromise.
Every Chanukah, we reciprocate in kind. How many lights must be kindled on the Chanukah menorah? Most would reply: one on the first night, two on the second, and so on. The law however is otherwise.
According to the Talmud (Shabbat 21b)
“The mitzva of Chanukah is (fulfilled) with a single light for each household. Those who do more than is obligatory (mehadrin) kindle a single light for each individual. Those who do more than those who do more than is obligatory (mehadrin min hamehadrin)…kindle one light on the first day and add an additional light on each succeeding day.”
There are those who buy the least costly tefillin on the market, who give the absolute minimum that the laws of Tzedaka mandate, who employ every halachic exemption and loophole they can find. But when was the last time you saw a single light in the window of a Jewish home on the sixth night of Chanukah? On Chanukah, we all “do more than those who do more than is obligatory” – after all, G-d did the same for us.

12) Magen Avraham 670:1 (Abraham Abele Gombiner 17th century)
So why just the women? Since the miraculous victory came about through the heroic actions of Judith, the women of the ages felt a special affinity to the Chanukah lights and sought to honor them in the greatest way possible

13)Code of Jewish Law 670:2
The many meals which we add on [these days] are voluntary meals, since [the Sages] did not establish them as [days of] feasting and joy. Rem"a: But some say that there is somewhat of a mitzvah in adding meals, because during those days was the Dedication of the Altar (Abraham Kara of Prague). It is the custom to recite hymns and songs of praise during the feasts added on them, and then they are mitzvah meals (Book of Customs). Some say that cheese should be eaten during Hanukkah, because a miracle was done through milk which Yehudit fed the enemy. (Kol Bo and Nissim of Gerona).

14)Talmud, Shabbat 21b: The Mitzvah of kindling the Chanukah lights begins at sunset…They are to be placed in the outer doorway of one’s home; if one lives on the second floor, one should place them in a window which looks out to the street.

15)Rabbi Yosef Yitzchak Schneerson:
We have to listen carefully to what the candles are saying.

You're helping women all over the world.
Every amount helps! Thank you so much!

Keep me in the loop

If you're a Jewish woman of any age, Bais Chana is the crash course on the soul of Judaism that you've been looking for. We're the adult Jewish summer camp you missed out on. We're your deep dive into Judaism. It's time to find out more, isn't it? Tell us which classes or retreats you want to hear more about and what you'd like to see in your inbox - and presto, it's there!